The Power of Planet Earth 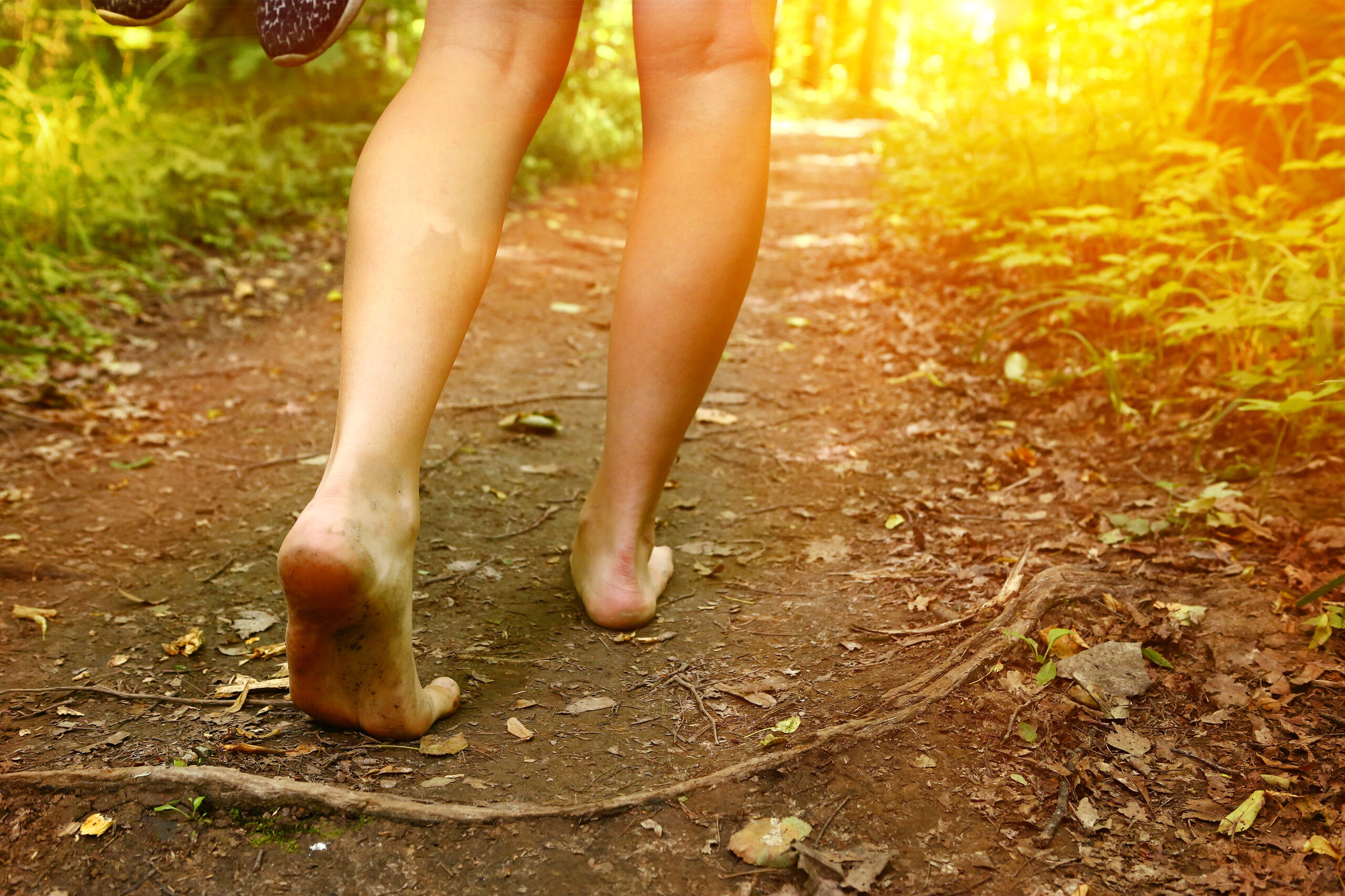 Reconnecting with nature was a huge part of my healing journey. Spending time hiking outdoors helped me be mindful of the present moment, allowed me to get some movement in, and left me feeling grounded and energized. Being in nature is my way of connecting with Source, which is how true healing occurred for me. Barefoot hikes became one of my favorite pastimes as I came to realize the immense healing power of the Earth.

Ever notice how great you feel after walking barefoot on the beach or grass?

The Earth has a negative charge, which according to extensive geophysical and atmospheric research, is maintained by a global atmospheric electrical circuit involving solar radiation and lightning strikes. This “electric nutrition,” is a virtually limitless supply of mobile antioxidant electrons that gives the ground we walk on (as well as bodies of water) a natural negative electric charge.

This phenomenon nourishes all living beings – humans, animals, and plants. Mounting evidence suggests that the Earth’s negative potential can create a stable internal bioelectrical environment for the normal functioning of body systems. Also, oscillations of the intensity of the Earth’s potential may be important for setting the biological clocks regulating diurnal body rhythms (like cortisol secretion).

Earthing (also known as grounding) refers to contact with the Earth’s surface electrons by walking barefoot outside, swimming in a natural body of water, or touching rocks, trees, snow or the ground with your bare skin. You can also achieve grounding by sitting, working, or sleeping indoors connected to conductive systems that transfer the energy from the ground into the body or even by bathing in a tub connected to metal piping. Emerging scientific research supports the idea that the Earth’s electrons induce physiological changes of clinical significance – like reduced pain, better sleep, a shift from sympathetic to parasympathetic tone in the autonomic nervous system, and a blood-thinning effect. The degree to which the Earth heals us is substantial. Grounding recharges our blood, thins it, enhances immune function, and quickly reduces pain and inflammation.

Many of us no longer wear animal skin shoes, walk barefoot on the Earth, or sleep on the ground and we also work or live in high rises well above the Earth’s surface. The lost contact with the Earth may contribute to electrical imbalances, a build-up of disruptive static electricity (positive charges), and an unrecognized electron deficiency in the body which can leave our body vulnerable to dysfunction, disorder, and disease.

Earthing appears to correct this “electron deficiency syndrome,” an overlooked and likely significant cause of inflammation and multiple health disorders. A lack of electrons can de-saturate the electron transport chains in mitochondria, leading to chronic fatigue and slowing essential activities of the cells of the immune system.

Can direct physical contact with electrons on the surface of the earth have positive health outcomes?

It is well established that electrons from antioxidant molecules neutralize reactive oxygen species (or free radicals) involved in the body’s immune and inflammatory responses. And the best electron donor is right under our feet – the surface of the Earth! When you connect with the earth, your body absorbs what is known as “free electrons.”

Free radicals are missing an electron. They are positively charged.  In order to become stable – or neutral – they “steal” an electron from another molecule. This triggers a chain reaction which is how free radicals cause widespread inflammation, damaging tissues and cells. So when a free radical meets a negatively charged free electron, they bond to become stable which stops the chain reaction in its tracks, thereby reducing acute and chronic inflammation. Also, thinning the blood may allow for more oxygen delivery to tissues and further support the reduction of inflammation.

What is Inflammation, exactly?

When you are injured or invaded by pathogens such as bacteria or viruses, your immune system reacts – blood vessels dilate, increasing blood flow to the affected area, resulting in redness, warmth, and possible swelling. Capillaries become more permeable, allowing fluids and proteins to pass easily between the blood and cells.

Specialized white blood cells on a mission to destroy invaders are summoned to the area and secrete free radicals. Free radicals help to break down damaged tissues and cells, however, they can leak into healthy tissues and damage them, causing pain and swelling. Acute inflammation is a natural and healthy response to injury and infection, but if inflammation goes on too long, problems such as chronic pain and loss of mobility can occur. Inflammatory swelling can put pressure on pain receptors and can compromise the microcirculation, leading to ischemic pain. Inflammation can also cause the release of toxic molecules that also activate pain receptors. Modern biomedical research has documented a close relationship between chronic inflammation and virtually all chronic diseases, like heart disease, diabetes, and some forms of cancer, as well as the aging process itself.

Research has shown that earthing has a number of physiological effects on the body, including the reduction of pain and inflammation, as well as improved sleep.

One 2010 study looked at a common condition which occurs following excessive exercise – delayed onset muscle soreness – in 8 individuals.The study measured 48 different inflammatory markers including white blood cells, hormones and enzymes. Subjects all underwent the same, strenuous exercise and had their blood sampled before and at 24, 48 and 72 hours afterwards. Half of the subjects were earthed using conductive patches and sheets, while the control group was sham earthed. After earthing, 30 of the 48 markers were significantly different between the two groups. White blood cell levels were reduced in the earthed subjects and they reported less subjective pain and faster recovery time.

There have been multiple case studies documenting reduction in both acute and chronic inflammation as a result of earthing using infrared medical imaging and measurements of blood chemistry.

Earthing has been found to produce immediate and significant improvements in measurements of autonomic nervous system (ANS) functioning critically important in the regulation of inflammatory and stress responses. A 2017 study in premature infants found that earthing the babies significantly increased heart rate variability which indicates improved vagal tone. Heart rate variability refers to beat-to-beat alterations in heart rate, and is influenced by the sympathetic and parasympathetic branches of the ANS. Recent research shows that the vagus nerve plays a major role in the “anti-inflammatory reflex,” a mechanism controlling basic immune responses and inflammation during pathogen invasion and tissue injury.

Can this simple, natural, FREE act of connecting with the Earth be a profoundly effective strategy for managing chronic stress, autonomic nervous system dysfunction, inflammation, pain, poor sleep, disturbed heart rate variability, hyper-coagulable blood, and many common health disorders? It was clear to me that connecting with the Earth helped ease some of my Lyme symptoms like pain, inflammation, and fatigue. The research supports the concept that grounding the human body may be an essential basic to add to your health regimen. There are many befits to immersing myself in nature, and connecting to the Earth continues to be a part of my routine that keeps me in vibrant health. Whether it’s walking barefoot, taking a dip in the ocean, or hugging redwoods – you will find me implementing my Earthing treatment plan!

This article was written by Dr. Christine Arseneau, Pharm.D., FMCHC who founded Lyme Support after fully recovering from her own journey with Lyme disease and multiple co-infections. We know living with Lyme disease is complicated and there is never one simple answer. 1-on-1 guidance and practical, cutting edge solutions make the healing journey so much easier. If you are ready to make health, happiness, and hope your new normal, reach out to us! We offer personalized health coaching using a functional medicine approach.